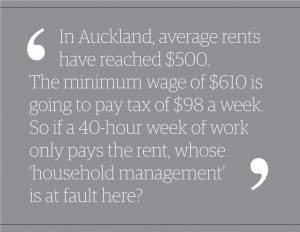 There are, in these tangled times, advantages of having travelled fairly widely in poor places. Not tragic lands where mothers must live with their children’s enormous eyes and bodies like a handful of sticks, but small village clusters: islands with one volcanic cone rising from the mid-Indian ocean . . . deep Brazilian rivers . . .the unfashionable parts of the West Indies . . . fishing villages in Brittany.
A flashing smile from a West Indian woman whose hands resembled the root vegetables she was piling artistically onto her market stall would have outshone that of any diamond salesman in Vancouver’s downtown precinct.
St Helena was poor as a church rat, its slopes naked shale pouring into the sea after centuries of feral goats. Protein for the inhabitants of its tiny hamlet was imported tinned corned beef. A year into a shoestring-voyage around the world, we ourselves had long been on a diet of far too much salted pelargic fish. Dot’s Café – serving her specialty fishcakes, redolent with rosemary and the fresh pilchards caught by her husband, the island’s policeman – was as cheerful a gathering place as any I’ve known.
Fellow ocean sailors, barely older than ourselves, were sailing on Scandanavian retirement pensions. The old financial elites were not yet visible above the post-war rise in more general prosperity.
These were the ‘70s, however, and at home in New Zealand Muldoon’s Marac lending houses were sprouting on prime mainstreet locations everywhere. Debt, Big Oil and the wide boys with Lear jets were here.
This week the Government announced a 50-cent minimum wage increase to $15.25 an hour.
The Living Wage Movement pointed out the actual minimum amount a family needs to earn has increased by 55 cents to $19.80 an hour.
That leaves the full-time minimum wage-earner at least $10,000 a year short of paying the bills.
In Auckland, average rents have reached $500.
The minimum wage of $610 is going to pay tax of $98 a week.
So if a 40-hour week of work only pays the rent, whose ‘household management’ is at fault here?
Not the citizen who was born to a share of this society. Not the immigrant family making a new home here, also born to their share of the global society.
Add in the asset-stripping and offshore ownership that has brought New Zealand to this point over the last 40 years and we are long overdue for more than niggardly tinkering.
It’s our political structure that has turned toxic.
Keith Rankin, lecturing to the Fabian Society recently and making a case for a universal basic (UBI) income for New Zealand, made the point that such a tax represents a direct application of the principle of horizontal equity – ie treating equals equally. It means a single rate of income tax and a universal, publicly-sourced income that amounts to a ‘public equity dividend’.
“A universal payment should have no ‘claw-back’. UBI is not a scheme to redistribute income from rich to poor, nor from poor to rich. A benefit for the poor funded by higher marginal tax rates on the rich is not a UBI.
“Rather, a universal basic income is a central component of an equitable mechanism of ‘distribution’, not ‘redistribution’,” he said.
Nor would it preclude needs-based transfer payments which  derive from the principle of vertical equity – treating people facing different circumstances differently. They would complement payments based on a UBI’s horizontal public equity.
“Public equity follows from our public property right, just as private equity follows from our private property rights. Our equity in our houses is a part of our individual wealth. Our equity in our public domain is likewise a part of each individual’s wealth,” said Rankin.
It would be a place to start rebuilding a civilised and fair society that recognises that a political ‘economy’ really is a wholly-owned subsidiary of our shared and finite environment. It’s even the sort of wholesome enlightenment New Zealanders have pioneered before. • Liz Waters

Great headlines – but would you take a punt on him?