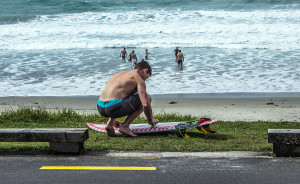 If you ask any surfer on the island about the local surf they’ll say it’s pretty rare.

But recent weather has brought in some decent sets of about one and a half to two metre high waves.

Someone who got out most days was Isaac Abbot-Martin, a keen surfer who just came back to the island after living in Whakatane for a few years.

“Honestly, the waves are so rare here that you have to go out if there’s
any swell at all.”

Gulf News was told that when the waves are up sometimes people call in sick just so they could surf the rare Waiheke waves for the day.

The waves are cleanest when there’s a southerly wind and the swell matches the wave height, so if you’re keen to learn and you want a good day, look up swellmap.co.nz and you’ll be able to choose your day.

The best surf beach on the island is hard to pick, but if the waves are good anywhere, it’ll be Onetangi with its huge shoreline.

I managed to get some pictures of Isaac surfing Onetangi before the waves dropped off. • Jake Legge