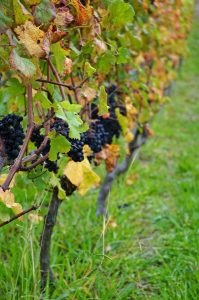 Harvest 2017 may come to be viewed as the grape escape by the island’s winegrowers.

After an excellent fruiting season and dry January and February, hopes for a standout vintage were dashed by heavy downpours in March and early April. Many vineyards lost some fruit, or were forced to pick varietals earlier than was ideal.

Most rushed to bring in thin-skinned chardonnay ahead of the first, early-March deluge, but with the second rain instalment several had to leave later ripening reds to the elements. Some report losing around 15 per cent of those crops, particularly cabernet sauvignon and similar Bordeaux varietals.

But with the grapes now in the vats, winemakers are encouraged by what they are seeing and smelling.

“Those big downpours were pretty exceptional – we had record rainfall in March,” says Luc Desbonnets of Frenchman’s Hill Estate.

“So we’re saying we’ve had an exceptional vintage.

“We’ll be putting out everything we were planning to but we’ll be down a bit on volume.

“We’ve had very unusual conditions but made some really beautiful wines at the end of it.”

Mr Desbonnets says considerable investment in drainage has paid off on the vineyard’s north-facing slopes above Okahuiti Creek, planted in 2006.

Whereas the 2016 summer was plagued by humidity and drizzle, at least this year’s downpours were followed by periods of warm sunshine and plenty of wind, which helped to prevent rot setting in.

“We had little patches that went off and we left a bit of fruit out there but overall our winemakers are really pleased with what came in. The smells coming out of the vats are really amazing. Everything is well-balanced but without that strong alcohol.

“It’s another learning curve but that’s what it’s all about – pulling off the good wines in the bad seasons and getting good results.”

At Peacock Sky, co-owner Rob Meredith says it was one of the hardest seasons since the vineyard’s first harvest in 2009.

“We came out of it reasonably well but we did suffer a couple of fairly significant crop losses. We’ll be producing a smaller amount of chardonnay this year and we’re not planning on making any cabernet sauvignon. To get cabernet fully ripe, and make the quality that we aspire to, it needs to hang on the vine.

“Winemakers are really going to be earning their money this year. You can still make nice wines in a season like this – you just have to work a lot harder.”

For the island’s biggest producer, Man O’ War Vineyards at the eastern end, losses were mainly confined to Bordeaux varietals.

“There is no doubt 2017 threw a few low blows but we’re genuinely excited by what we have in the winery,” vineyard manager Matt Allen says. “Under the circumstances the vineyards held up superbly well through March, which meant we got all of our whites off the vine in great shape.

“Chardonnay and sauvignon blanc in particular are as good as we’ve seen them. Syrah has again proven just how resilient it can be on the right sites and likewise our later ripening pinot gris from Ponui Island looks impressive.”

At the opposite end of the island, Jurassic Ridge owner Lance Blumhardt is “really pleased” with the way his wines are developing.

“It’s going to be a really interesting vintage with some very good wines – there’s no problem with colour and flavour and the lower alcohol is exactly what you want to produce some really great Bordeaux. A year like this sorts out the men from the boys.”

Kennedy Point winemaker Randal Peart says 2017 will be a year for wine enthusiasts.

“Varieties that were harvested earlier – including chardonnay and malbec and some of our merlot – look really good but some of our later-ripening cabernets and syrah felt the weather quite a lot,” Mr Peart says.

“Our 2017 wines are going to have lower alcohol but the flavour development continued through the bad weather and, with good acidity levels, they may age better.

“Whites on the island will be really good this year- everyone was harvesting madly before that early rain. Our reds from 2016 and 2017 will be blends rather than single varieties but they have good potential.”