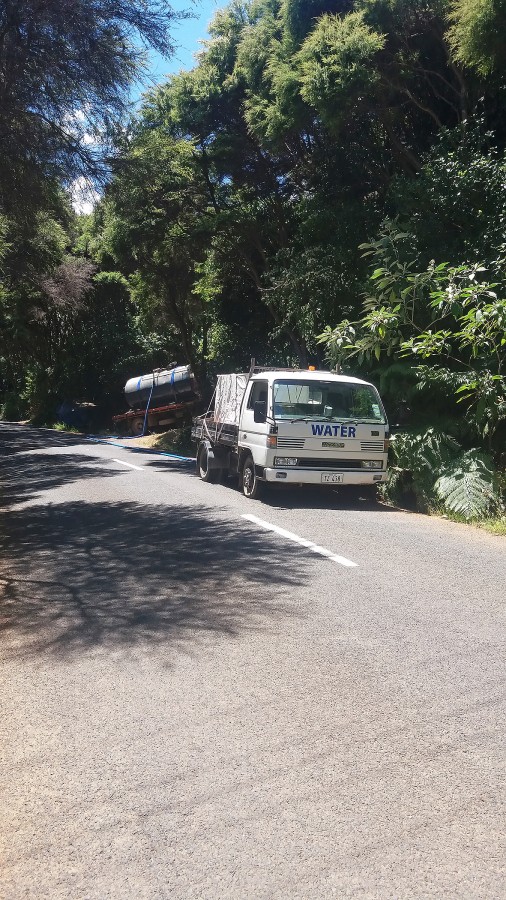 Water companies are teaming up in an effort to deal with the island’s current water shortage – and are keen to promote a “positive message” and avoid the panic buying they say they’ve seen in the last few weeks.

Jamie Burgess, who runs small-supply firm Water Now, has teamed up with Waiheke Aqua to tap into their water supply and fill the demand for small, emergency deliveries to those most in need.

“It was only common sense for me to join up with them,” he says.

“They’ve already put on extra staff, extra drivers, but they already have a structure in place … Joining forces was just the right move, it gets things flowing a lot better.”

He says he has noticed an upswing in “panic buying” and has recently arrived to deliver emergency supplies to find homeowners with more than half a tank of water left. He urges the community to exercise caution with their water usage, with companies on the island reportedly booked out beyond February.

“The current situation with the water, we believe, has been misrepresented in the community. We believe there have been some unhelpful comments from local sources that have done nothing to help the situation – almost scaremongering, if you would.

“Basically, without some of these comments, the situation wouldn’t be like it is. We’ve got panic buying, and a lot of panic buying. That is not good for us at all.”

At December’s local board meeting, chairman Paul Walden was quick to thank the island’s water companies for their efforts. With extra deliveries and emergency suppliers like Mr Burgess now regularly making deliveries, he believes they are making a dent in the ordering backlog.

“We’re extremely busy. There’s been no time off at all,” Mr Burgess says. “We’ve got relief drivers, going through the day and into the night. At this stage, I am about a day ahead of where I would have been with the emergency deliveries, so we’re slowly coming back.

“With this over-ordering, people can get a delivery from somewhere else and then they cancel, so that frees up another space.”

Despite the recent pressure on both the industry and locals, he says there have still been many moments of community spirit.

“Yesterday, I was at a gentleman’s house and he found out my next delivery was for someone who has an illness, so the first man paid for the second person’s water up front for them … It made my day, and that’s what we want. A positive attitude and the community helping each other.

“If there are emergencies, please keep calling. I will get there.” • Richard Jones