In the midwinter of 1940, the Royal Mail Ship Niagara carrying eight tonnes of South African gold bullion departed Auckland on the second leg of its regular run from Sydney to Vancouver. It was wartime and the giant, twin-funnel luxury liner, built in 1912 and sometimes dubbed the ‘the Titanic of the Pacific’, was carrying only a fraction of its passenger capacity – 146 people with 203 crew.
Off Whangarei’s Bream Head, she triggered one of the net of 228 moored contact mines sown a week earlier in shipping lanes in the northern and eastern approaches to the Hauraki Gulf by the disguised German raider Orion that had made a secret six-week dash from the North Sea.
Everyone aboard was taken to safety next morning, rescuers describing the liner’s 18 lifeboats bobbing in gentle swells amid deck chairs, dunnage and other flotsam.
The ship sank in 400 metres of water and although almost all of the gold bullion she carried was eventually and even heroically recovered, her bunkers are believed to still hold a significant proportion of the 4000 tonnes of viscid fuel oil she carried for the Pacific voyage.

The Niagara poses the risk of a catastrophic oil spill spreading into the Hauraki Gulf, says Waitemata and Gulf councillor Mike Lee.
The Royal Mail Ship Niagara was sunk by German mines off Bream Head in 1940 and marine biologists are concerned about the potential for oil stored in its tanks to spill into the ocean as the vessel deteriorates, says Mr Lee.
Tidal currents mean oil from the wreck would be likely to wash down to the Hauraki Gulf and Bay of Plenty.
“Seabird scientists say this would be catastrophic for the Hauraki Gulf in terms of black petrels and New Zealand storm petrels, which are so rare.
“It would have impacts on the marine reserves around that area.
“They fear it could make the Rena disaster look like a picnic,” he says.

Mr Lee has called on Auckland Mayor Len Brown to ask the government and relevant agencies to investigate how much oil is aboard the sunken vessel and to extract any oil found.
“It could be a catastrophe and we can’t take that risk,” he says.
The luxury liner could have had more than 4000 tonnes of fuel in its tanks when it struck a mine while carrying gold bullion from Auckland to the United States in 1940.
It currently lies about 120 metres under the sea within the Auckland coastal marine area.
The Rena, which was wrecked in the Bay of Plenty in 2011, spilled about 350 tonnes of oil that devastated the coast and wildlife. • Rose Davis 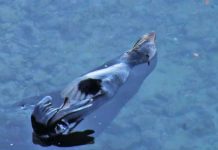