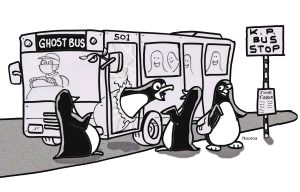 Bus delays and cancellations fuelled by drivers being off sick with covid are adding to frustrations with Auckland Transport’s (AT) bus services on Waiheke.

The 501 bus, which ostensibly runs regular services to Kennedy Point via Surfdale, has been coined a “ghost bus” by fed-up residents after being sighted on numerous occasions driving its route without passengers.

The issue with the 501 not syncing with ferry arrival or departure times at Kennedy Point was raised by Gulf News in a December 2021 article. At the time, an AT media representative explained that the bus is designed to sync only with arrivals at Mātiatia, as foot passenger demand was greater. They further explained the Kennedy Point Sealink services “are not considered a priority due to issues with tides, which can delay ferry arrival times.”

This policy has led to the 501 and 50A bus often arriving at Kennedy Point outside of scheduled peak visitor times and unable to pick up waiting passengers in order to keep to schedule.

On Monday 30 May, this reporter waited for the bus after getting off the Sealink ferry at 8:50 am. On arrival, a 50A bus had a ‘not in service’ message switched on immediately at 9:20am. After a short break, the driver left the stop with an empty bus, despite travelling the return route to Mātiatia. Passengers were forced to wait a further 16 minutes until another bus arrived at 9:36am. Day-trippers spoken to by Gulf News said they were  “gobsmacked” and stated they thought the situation was “farcical.” • Jim Birchall