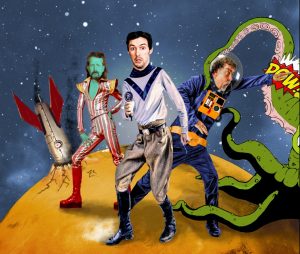 Waiheke Comedy launches into outer space with its latest show, 2021: A Space Oddity.

Known for popular stage soap operas Ostenders and Rocky Baywatch, Waiheke Comedy members have set their phasers to stun as they take on the challenge of performing an entirely made-up-on-the-spot story set in the final frontier of space.

“We’ve been dying to do a sci-fi themed show with costumes, props, explosions and giant tentacled monsters for years,” says Zephir, who is busy raiding recycling bins and charity shops for ray-gun parts and other spacey items.

“We’re mostly inspired by those cheesy, pulpy shows from the 50s and 60s but we’ll also throw in plenty of other great sci-fi tropes and references as much as possible.”

At the helm of the endeavour will be Wellington-based director Matt Powell, who has more than 20 years’ experience creating and performing shows.

“We tried to get HAL 9000 to run it, but there were scheduling issues, so we brought in Matt instead,” Warwick laughs, adding that although Powell may not be a sentient supercomputer capable of interplanetary travel, he has successfully directed many similar shows in the past.

In a similar format to the group’s stage soaps of 2020, Powell will guide the Waiheke Comedy space cadets from the sidelines as they jump into the unknown on their interstellar adventure.

“Having someone to direct the show live gives us a lot more freedom to relax into our roles and be creative without overthinking things,” Zephir says.

“The beauty of improv is its spontaneity and it’s hard to maintain that if you’re also trying to figure out how to weave all the weird things you’re doing into something that makes sense. That’s where Matt comes in.”

2021: A Space Oddity will blast off at 7.30pm on the Artworks Theatre stage on Saturday 17 July. Earthlings are recommended to book ahead at artworkstheatre.org.nz to ensure they don’t miss out on this intergalactic opportunity. Tickets are $25 online and $30 on the door, if available.•