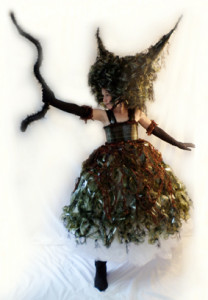 Local artist Ann Skelly has scooped a third place award in the children’s garment section of the World of Wearable Art (WOW) show in Wellington.

This year’s theme for the children’s section, where the garments are made for children but designed by adults, was ‘My Imaginary Friend’.

Ann says inspiration for her entry, titled ‘Reel or Imaginary?’, hit when she unearthed a collection of old film reels at the Waiheke Cinema garage sale. While she was already working on an entry, Ann says her “imagination fired” at this discovery, and she knew that the reels would become an integral part of her design.

A bolt of fabric later discovered at the Waiheke SPCA shop and her husband’s cycle helmet completed the entirely locally sourced and made outfit.

‘Reel or Imaginary?’ is Ann’s 11th garment in the internationally reknowned show over the years.

She usually enters the children’s section and has previously been recognised with a second place award and has also been highly commended and received honourable mentions.
This year’s show is the last to include a children’s section so it was “especially nice” to get a placing, she says.

Ann travelled down to Wellington for the show. “It was fabulous – they always just get better every year.”

Around 50,000 people are expected to attend the two-hour spectacle which runs until 11 October.

This year’s supreme award was won by a designer from Motueka.

Always having other costume ideas and projects on the go, Ann plans to enter next year’s show, but she is yet to decide on the category. For others who are considering entering in 2016 she says the entry kit is already available online, and can be downloaded from wowentrykit.com.