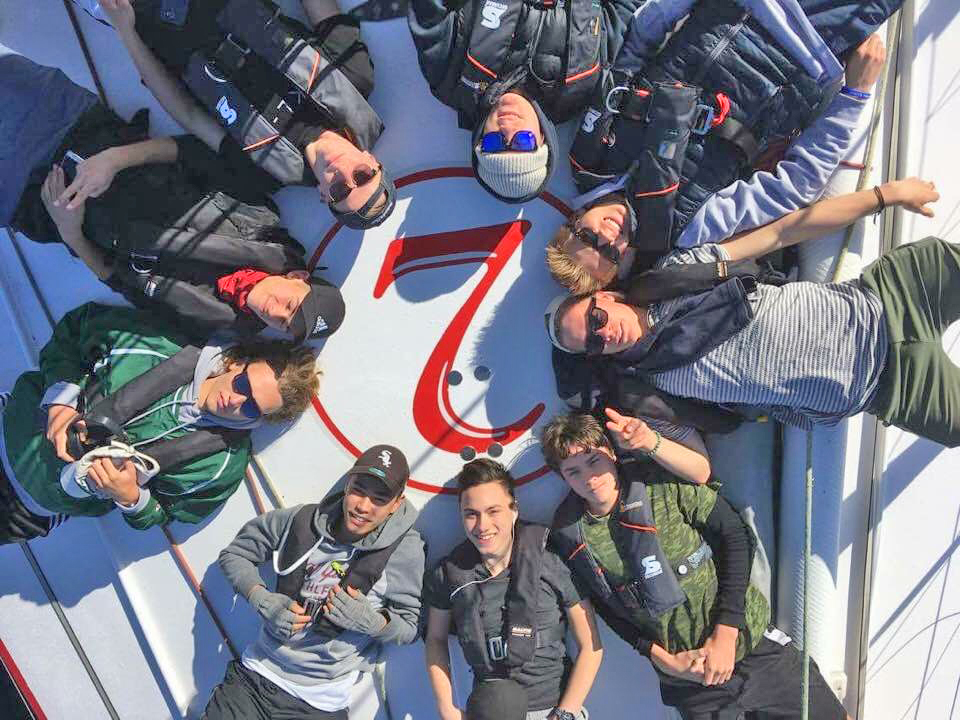 Members of the Waiheke High School Sea Sports Academy have enjoyed a fantastic four days sailing the Hauraki Gulf on Steinlager 2, the ‘Ferrari of the seas’.

The 24 students were aboard the boat made famous by Sir Peter Blake and his crew when they won all six legs of the Whitbread (now Volvo) Round the World yacht race in 1989-90.

The voyage was part of the year 12 and year 13 students’ Day Skipper and Boatmaster’s practical courses and started and finished at Matiatia.

Sea Sports Academy tutor Maria Heer says the trip has inspired students to experience more of the marine world, “to become champions of our oceans, seek careers on the water and be passionate about their aquatic recreation.

“It has often been called a life changing experience as students discover their strengths and new horizons,” Maria says.

The boat left Matiatia last Wednesday in a brisk breeze and, escorted by dolphins, reached Port Fitzroy on Great Barrier in less than five hours. The students were then joined around a campfire by the laid back, blues singing crew of Bay Explorer. Then the British training ship Tenacious sailed in to share the safe anchorage, looking magnificent in the setting sun.

They then continued to race dolphins around the north tip of Barrier before heading down to Whangapoua on the island’s east coast. There, teams of students had to build rafts to ‘rescue’ themselves from the island to get back to the boat, while keeping their top halves warm and dry.

“Their lower halves, of course, were wet and numb, but the mission was accomplished in very good humour. All survived,” Maria says.

“Friday was a sunny, velvety motor-sail down to Coromandel with the feel of an early summer blaze engulfing Happy Jack (Motukahaua) Island for a magic lunch, swim, kayak, explore, beach clean-up, and some stone skimming R and R.

“We carried on to Te Kouma Harbour for dinner and another marshmallow roast ashore in the still evening. The phosphorescence was stunning and unforgettable, leaving our sparkly footsteps in the sand and illuminating our tender wake.

“We awoke to the pastel peach sunrise for our last chilling wash and last rope swing plunges into the ‘still-not-inviting-but-get-it-over-with’ sea. A broad reach back to Waiheke in a 20 knot nor’wester gave us exciting angles to Kennedy Point.

“Over too soon and our lives blessed for this opportunity to explore the treasure of the Hauraki Gulf.

“Thanks to the magnificent Steinlager 2 crew – Andre, local Hamish, Miranda and Tony – who kept us involved, challenged and safe and to Stephen Burn for parent help.” •