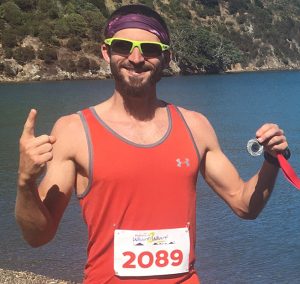 When I ask Nicolas Verniest what it’s like to run 100 kilometres, he says although he feels exhaustion permeating every inch of his body and it takes several weeks to recover fully, it’s all worth it. The 31-year-old Belgian is now planning to run the entire 100km Te Ara Hura trail in one day to raise money for Waiheke’s Native Bird Rescue.

Obviously, Nicolas isn’t new to running. During his time spent living on Réunion Island, he completed multiple long-distance races and has run 110km in a single day.

“When I’m running I love seeing birds, and since I’ve been on Waiheke, my girlfriend and I have especially enjoyed watching the little kingfishers.”

Nicolas and his girlfriend Christelle arrived in New Zealand five months ago just as Covid-19 was beginning to make its presence felt. The two both enjoy outdoor activities –  particularly hiking – and have discovered many of the island’s tracks and trails. Bird watching on their excursions, they fell in love with many New Zealand natives, and when Nicolas found Native Bird Rescue on Facebook he decided to use his love of ultrarunning to support the bird rehabilitation charity. • Sophie Boladeras