How do you solve a problem like Maria? sing the nuns of the Austrian abbey’s spirited novice in the Rodgers and Hammerstein musical, The Sound of Music.
Enjoy Tara Doherty-Eagles’ flawless performance as the would-be young nun with a song in her heart in the Waiheke Choral Society’s production, The Sound of Music, is the short answer.
The musical’s songs are sugared with sentimentality, with an occasional twist of irony, while the plot is a drama of two halves.
Maria Rainer is sent by the Mother Abbess to act as governess to the seven children of emotionally reserved widower, Captain Georg von Trapp, played with convincing pathos and military rectitude by Peter Forster. The young singer saves them all from the stifling atmosphere of the family home with her vitality.
The moment the emotionally repressed, militarised family patriarch thaws in the warmth of Maria’s vitality, though, Nazism intrudes. The uncooperative Austro-Hungarian war hero seems doomed to imprisonment, or worse, under the Third Reich.
Director Andy Spence has ensured mannerisms and mores of the era are reflected in the actors’ delivery.
The nuns sing with seasoned grace, with particularly strong performances from Sandra Alley and Doris Aoina. As Georg von Trapp’s assuredly well-off, would-be bride, Maya Spence plays Elsa Baroness von Schraeder with stylish airs while Tim McMain’s Max Detweiler, who has an unsettling connection with the Nazis, lit up the stage with charisma.

Under Maria, the von Trapp children sing, they play leap-frog. Liesl dances with her would-be amour, the messenger boy, in fine ballroom style.
Both casts of von Trapp children have made their characters their own, and the audience saw both perform in the dress rehearsal when the second cast took over after intermission. The children’s casts will alternate through the season. In both casts, each child’s character is clear and they connect naturally with one another, Maria and the story.
Characterisation, acting and singing overall were outstanding. Diction, and the pace of delivery – a bugbear of amateur theatre – were cracker. Tucked into an upstage corner, the orchestra is fantastic. The choreography is sophisticated and the artfully simple costumes are beautifully designed.
Which means the production deserves a more economical set design that allows uncluttered scene changes.
The blue-lit Rose window for the abbey scenes and the sweeping staircase and French doors of the von Trapp family home worked well. Hopefully in the days between the dress rehearsal and opening night the rest of the set is stripped back to allow a far more seamless performance and the talented cast and musicians to shine even more.
The Waiheke Choral Society production of The Sound of Music will be held at Artworks Theatre from 26 May-11 June. • Mark Peters 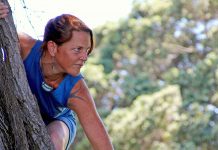 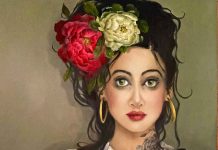 A Waiheke art tour distilled into a single visit