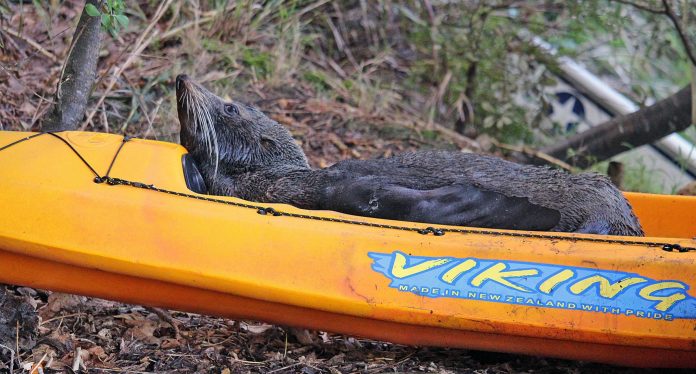 Kayaks stored on Waiheke’s beaches might irk locals, but one plastic boat was put to use as a daybed by a visitor to Oneroa beach on Monday.

The adult male kekeno, New Zealand fur seal, was spotted lying back in a kayak that had been stowed above the high tide line on a bank at the northwestern end of the beach.

Wildlife and mātauranga Māori expert Ramari Stewart checked out the seal on Monday afternoon, taking photos to help her confirm the age and sex of the kekeno.

“These guys forage at sea but they come to land to rest, it’s like roosting birds.

“They really do have to haul out and have a sleep. They’re attached to the land. They have rookeries but when they’re on foraging trips they haul out. When it’s rough that’s typically a time when they come ashore and rest. He was having a snooze and he picked a great spot.

“Down south they usually head for the rocks but your rocks [on Waiheke] are so nasty I’d look for a canoe too.”

With a very low tide it was important to create space for the seal, she says.

“We went and got some road cones to create a narrow corridor where we were recommending people did not go. They can move faster than you can, those big boys, they can really motor. Fur seals tend to be a bit snappy if you come too close to them. We usually advise people to not get between them and the sea.”• Erin Johnson