An improvised Waiheke Under-85kg Pirates rugby team, missing players affected by injuries and Covid, held their own in the first half against the GTEC Taniwhas in the competition’s second round last Saturday.

But they eventually succumbed to their opponents, losing 4-42.

First-five Aidan Hohneck slotted a penalty kick for the Pirates’ only points, while a stout defensive line repelled and frustrated the Taniwhas’ attack.

Dui Duilomaloma, James McKelvie, and player of the day Jayden Lewis made good yards up front, and the backline looked dangerous every time they moved the ball wide to Josh Williams and Troy Lomas. Struan Laburn was again strong at fullback with his positional play and counter-attacks, while Kegan Pitkethley had another busy game at halfback. A special mention must go out Ryan Patterson and Kyrin Harris, who alternated positions between the forwards and backs all afternoon as required, much impressing the coaching staff. 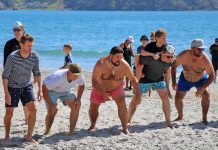