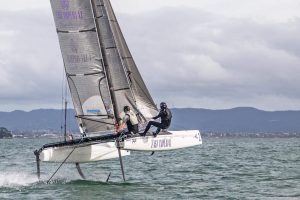 Waiheke sailing star Serena Woodall will continue to train hard, despite news the Youth America’s Cup has been cancelled.

The 18-year-old is the youngest of the Royal New Zealand Yacht Squadron’s Youth America’s Cup squad of six male and six female sailors, all hand-picked to represent their country.

And only a month after Gulf News revealed Serena was going to take part in the regatta, she this week told us she was “gutted” the racing had been called off as a result of government restrictions around immigration due to Covid-19.

Expected to inject $10million into the local economy, the event was planned as a curtain-raiser to run across three weeks in early 2021, around the Prada Challenger Series and the 36th America’s Cup.

“We are bitterly disappointed,” says RNZYS Chief Executive, Hayden Porter. “The sailors, boat builders, sponsors plus everyone who has invested their time and passion into Youth America’s Cup event are all devastated by the Ministry of Business, Innovation & Employment’s (MBIE) decision that this cannot go ahead.

“We are struggling to understand how that is possible … Furthermore, it came at no cost to the Government at a time where New Zealand needs this type of event and investment.”

With 19 entries from 13 nations confirmed, Serena said many of these international sailors had been training full-time for months and it was a huge disappointment for everyone involved.

“One of the reasons given was that local talent could fill the spots for international teams; that was a bit of a kick in the guts,” she said. “It’s an international event and you need international competition to run it, we don’t have the money in NZ.”

Serena says she plans to continue training with her team because, if Emirates Team New Zealand has a successful America’s Cup defence in March 2021, the RNZYS intends to reinstate the event later that year.  •Liza Hamilton