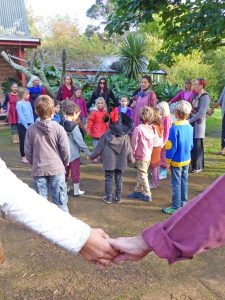 Excitement was in the air as Waiheke Steiner School opened at Fossil Bay on Monday.

After three years of struggles to find a site, the school finally opened in rooms beside the Steiner kindergarten on Korora Road.

“We’re opening today and tomorrow we’re starting to look for a permanent location. The challenge isn’t over yet,” Ms Harvey says.

The rooms on the Fossil Bay property owned by Mike and Vibhusha Delamore housed a Steiner school about 10 years ago but have been used for accommodation in recent years.

Spaces are available for up to 25 children, so more enrolments are possible.

An earlier attempt to use Surfdale Hall as a temporary school location saw the group spend about $16,000, that had been gathered through fundraising, to pay non-refundable fees for a resource consent application. However, Auckland Council duty commissioner Greg Hill decided in January to notify the application on grounds that others might be deterred from using the council reserve if the school was in the hall.

The school development team put the application on hold to avoid a hearing process that would have cost even more, with no guarantee of approval.

Waiheke Local Board supported the school using the hall, which had one regular user that the school was willing to share space with.

“The local board really wants to get more use of the halls,” Ms Harvey said. “There are no regular users of Surfdale Hall now.

“It was upsetting at the time, but we feel really blessed to be at Fossil Bay.”

Support from the community has been “really heartening”, with many people saying there is a “clear need” for educational alternatives on the island.

School development team member Claudia Hellberg told children and parents at the opening celebrations on Monday that it had been a “long journey” to the school’s first day.

“What I find most amazing is we’re still here,” Ms Hellberg said. “We wanted to set up something for our children, but it has become something that needs to be here for the community and for future generations.

“We are spreading hope for good education in a wider circle.”

The school team is setting up the Helios Fund to provide financial support for families who want to send children to the school but can’t afford the full fees. Donations and sponsors are sought.