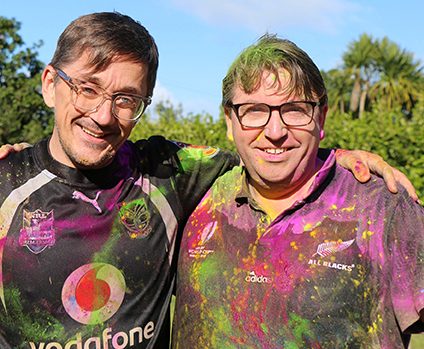 Waiheke Primary School children were pelted with colourful paint powder and splashed down wet and wild water slides to put the fun into fundraising last Friday.

Principal Nick Shaw – who also pluckily entered into the mucky spirit of the day – says it was a fantastic event that started with a competitive cross country run that was followed after morning tea with a “mud run”.

Helping to return children to a clearner state was Wai Water and Waiheke Volunteer Fire Brigade, who hosed everyone down.

“It was a great lot of fun and covered fundraising, an end of term celebration, physical fitness and showed that even if it’s wet, it’s OK to get dirty,” Nick says.

The school is fundraising to build a bike pump track costing anywhere between $40,000 and $80,000, “depending how wild our imaginations go”, he says.

Friday’s efforts raised $16,000 which is a great start that pays for designs and any potential council costs, says Nick.

Teachers Anna Wainwright and Casey Ridsdale organised the event and the kids had an absolute blast, he says. • Erin Johnson