Police are continuing to investigate a serious scooter crash on Waiheke that left a 33-year-old man in Middlemore Hospital on 20 April , and no charges have been laid.

Waiheke Police Sergeant Raymond Matthews says the scooter rider is still recovering from life-changing injuries and is not fit to be interviewed by police.

It was the second serious scooter crash on Waiheke in just over four months, and Auckland Transport statistics show the island has one of the highest rates of scooter crashes in the region, with one crash per thousand residents between 2017 and 2021.

Christian Hoss-Nielsen, owner of scooter and bike hire company Bikes and Beyond, says it is a reminder that talking about both active and passive safety is really important for riders.

To that end, Bikes and Beyond staff not only encourage customers to wear helmets and appropriate clothing to protect themselves but give each customer a safety briefing. “It’s in our interest and theirs to make sure they don’t get hurt.”

Potential customers also have to ride a test circuit around a nearby roundabout, Christian says. “Where we can see them, out on the road indicating and going up the street so we can see their balance and how well they control [the scooter]. About one in 20, we have to tell them ‘scootering is not for you, here’s a pedal bike or the bus’.”

Christian says it’s important riders know how to handle the scooters, because Waiheke’s roads are narrow and often winding. Even though traffic is fairly light most of the year, it is easy to get surprised by a vehicle coming the other way or to misjudge a corner and lose control on loose gravel or the grass berms. However, most scooter crashes only result in a few scrapes and bruises. “It’s very rarely more than pride that’s injured.” • Paul Mitchell 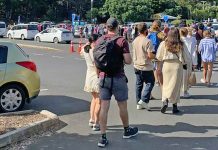