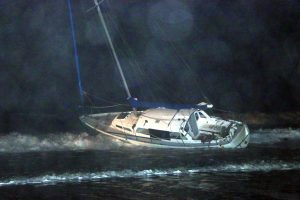 Waiheke builder Zephyr Mills and Robbie prepare the yacht’s anchor that was laid out to keep the bow into the surf as the tide rose.

A former navy diver (centre) swam a line ashore from the tug Maui 1 outside the Onetangi surf break. Local people heaved ashore the heavy hawser that would pull the stricken yacht out through the surf.

Lines were rigged around the hull to ensure an even pull on the vessel.

Skipper and new owner of the 36-foot Maelstrom with salvage master Nick Lewis after the yacht was successfully hauled off the beach.

The yacht was towed to Matiatia where, showing very little sign of damage, she spent much of the weekend before being taken to Auckland for repairs.

Maelstrom, in the headlights of a car ashore and watched by dozens of wellwishers lining the beachfront road, wallowed painfully in the break as the tide rose.

A cheer went up from dozens of islanders lining Onetangi’s dark beachfront road on Friday night after the 36-foot kauri yacht Maelstrom was successfully hauled off the beach and through the surf by a waiting tug.

Weather reports had made it an anxious wait for the high tide for Rotorua owner Robbie (just Robbie) who had bought the kauri sloop only three days earlier.

His delivery voyage from Auckland to Tauranga came to an end after the Spencer-designed yacht’s engine failed to start and, at the top of the morning tide, she was pulled into surf driven by three-and-a-half-metre swells.

The shuddering trip through the break had been a stark reminder of the way people probably arrived on the island over the millennia, Robbie said ruefully as the tide receded and the magnitude of the problem became apparent.

The day, as he admitted, could have been one of the most stressful situations of his life, but everyone had been very supportive, helping him “at least keep my head looking forward with anonymous gifts of food, lodgings and encouragement”.

“Surely, anyone who visits Waiheke will be richly rewarded.”

Blaming unchecked equipment and ignorance of safe practice, he said the stranding had tested his own metal. “One thing goes wrong at sea and the situation can cascade out of control.”

Salvage master Nick Lewis of Marine Services Auckland Ltd – a part time islander – was quickly on the scene to see how the yacht and crew had fared, assessing the situation and judging the three-skin kauri vessel was sound enough to come off on the evening tide.

Lines were rigged around the hull and the veteran seaman mustered a crew to bring his company’s eight-tonne tug Maui 1 from Auckland for the evening tide.

To watchers on the shore, it was a long wait with the yacht wallowing in the surf before the tug’s lights became visible. She stopped beyond the outer break just on 8pm, a former navy diver visible in the decklights as he prepared to swim a line ashore.

Local people pitched in to help haul the heavy towing hawser ashore and the tug took the strain, incoming waves helping to lift the Maelstom out to sea in a series of hops. The actual rescue took barely half an hour.

Despite the pounding the yacht appeared to be taking on the incoming surf, the rescue “went fine – as planned,” Nick said. Since she wasn’t taking on water, the decision was made to leave the yacht in the shelter of Matiatia for the night.

A veteran of 30 years in the tug business, Nick says they have about 50 such rescues a year, 15 after one recent cyclone alone.

Maui 1 is Auckland’s only remaining firefighting tug and was deployed on salvage work on the Rena. Technically a tractor tug with Voith Schneider-driven power units and a draft of 2.7 metres, her extreme manoeuvrability made her ideal for the work.

This week, Robbie was back in Auckland working on repairs to the yacht.