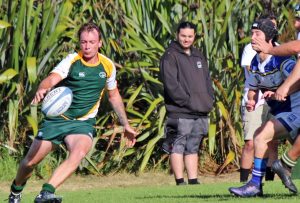 On Saturday the Pirates kicked off their 2021 U85kg season against last year’s beaten national finalists the Varsity Squids.

It was a baptism of fire for the new Waiheke team re-entering the competition after a three-year hiatus, and the 5-62 scoreline highlighted the fact most of the team were playing their first ever competitive game of senior rugby.

While the result of the game was never in doubt, the score did not reflect the ferocity of the Pirates defence which puts the team in good stead going forward.

Captain Ben Kara led from the front inspiring the forwards to put in an entire 80-minute effort, with standout defensive efforts from Jesse Chiplin and Fetu Langi. The work at training on scrummaging and lineouts paid dividends with the Pirates getting parity against a much more experienced pack. New lock Ryan Neave had a solid start to his rugby career with a big day in the engine room.

The Pirates’ backs had a tough day at the office with little clean ball coming their way, and having to deal with wave after wave of Squids’ forwards running into the Waiheke midfield. Solid defensive efforts from Jackson Page and halfback Alex Branch blunted the attack and prevented further damage to the scoreboard, and Roman Ord was a tackling machine on the right edge.