Not only did Waiheke woman Jane Scarles win $10,000 to spend on sports gear for a nominated school last week but she won rugby legend Dan Carter as well.
The former All Black visited the nominated school, Waiheke High, last week to hand over the cheque. He also took student rugby players through a warm-up routine and ball passing drills. To round off the visit, Mr Carter signed posters, shoes, rugby balls and T-shirts for a long queue of excited children, mums and dads. 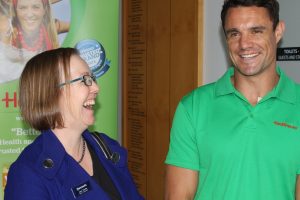 Mrs Scarles landed the win for the school when she entered a Healtheries competition at Countdown Waiheke four months ago.
The prize for the competition was $10,000 to spend on sports gear for a nominated school to be presented by Mr Carter.
“How wonderful to be in this situation,” principal Jude Young told visitors during the cheque presentation in the school hall.
When competition sponsor Healtheries phoned the school to announce the win, her first thought was it was a prank, she said.
“But not only did the school get the $10,000, they got a visit from Dan Carter.”
Mr Carter said after living in France it was special to be back in New Zealand.
“It is good to be able to give back to our youth. Youth are our future. I always had a dream to play for the All Blacks and I was fortunate enough to do that. Hopefully, the $10,000 will help some of the children in this room to realise their dreams.”
The school’s sixth grade rugby team coach, Matt Jacomb, said Mr Carter’s visit was a huge boost.
“It’s massive for the kids – especially for the future of rugby when a lot of younger guys are coming through. It’s good to have him here to emphasise the popularity of the sport to the school.”

Told by Gulf News he seemed to genuinely enjoy himself practising rugby drills with students, Mr Carter said: “You seem surprised.”
“You remind yourself you were there years ago, I had role models when I was a kid.
“Now I’m in a fortunate position to give back.”
Professional rugby began in 1996 but the values were the same as they were in the days of former All Blacks such as Ian Kirkpatrick and Colin ‘Pinetree’ Meads, he said.
“We are still learning but we’re getting some awesome athletes now. The game has changed so much since I started. There’s a huge emphasis on nutrition and looking after your body now.
“Rugby players are getting faster, stronger, bigger.”
He was from a small community himself, he said.
His hometown of Southbridge near Christchurch had a population of only 700 when he was a schoolboy.
“That’s why coming to little communities like this reminds me where I started.” • Mark Peters 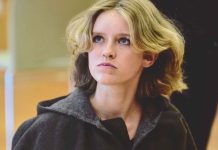