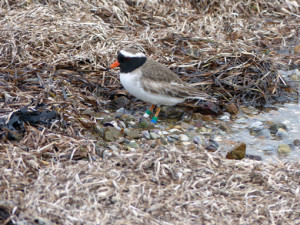 A critically endangered shore plover has flown from Motutapu to Blackpool Beach in recent weeks.

Department of Conservation (DOC) biodiversity and biosecurity ranger Art Polkanov says the young bird was released on Motutapu in January. Waiheke’s visitor could be seen as “a kind of a bird refugee which lost its home to urban sprawl,” says Dr Polkanov.

“The importance of the island shore habitats for some bird species is growing.
“Some territories on the mainland are becoming unavailable for birds because of the suburban development projects, in Albany, Coatesville and Whenuapai to name a few.

“Therefore I would expect more shore birds to be looking for a better life on offshore islands nearby,” he says.

Only about 65 breeding pairs of shore plovers or tuturuatu are known to exist in the wild worldwide.

Locals can help provide a safe habitat for the shore plover, which is closely related to the New Zealand dotterel, by putting dogs on leads, keeping cats indoors at night and controlling pests such as rats and stoats.

“New Zealand dotterel males are often killed by cats while incubating at night, because they don’t leave their nests,” says Dr Polkanov.

DOC is keen to hear about any sightings of shore plover or New Zealand dotterels on Waiheke.

“We need to know their distribution and nest grounds.”

Bird watchers can help identify when shore plovers visit certain areas, and record their interactions with other birds, such as antagonism at nesting grounds, aerial harassment, or predation.

Shore plovers were reported on Waiheke last year, but without photo confirmation or individual identification through leg bands.

Nineteen shore plovers were released on Motutapu in January and others have been released on the pest free island over the past three years.

Unfortunately, many of the birds disperse to other areas, where they are at risk from predators.