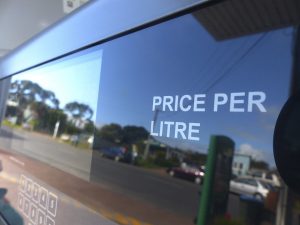 A Waiheke resident has spoken out after being charged more than $2.50 per litre at a petrol station last month because of a typing error, leading to questions surrounding the fuel prices on the island.

Dorothy Malan and her husband Dave were filling up in September at the Z Energy Station in Onetangi when they realised the price for 91 Octane was 2.519 per litre, as much as 30 cents above the usual price per litre on the island.

“We initially thought it must be a mistake, but then when we asked, but we were told it wasn’t, so we thought we’d just get the petrol that we needed and go to a different petrol station to fill up,” says Dorothy, who then found gasoline priced significantly lower, at $2.24 and $2.18.

The high price, however, turned out to be a mistake. Johan Visser, manager of the Z Energy Station, says: “It was an error, because it was an adjustment I made, and it was only like that for about an hour. It was only on one grade, and wherever we knew we had charged somebody that price, we made a refund.

“We noticed it after an hour, and it can happen. From now, we have to double check. It was an error of a decimal – it should have been something-point-five, but it ended up being five. A typo.”

Despite the unfortunate mix-up, questions remain for Dorothy about the island’s mark-up procedures for fuel supply.

Waiheke regularly has one of the highest prices for petrol in New Zealand, according to price comparison websites. An examination of prices as shown on fuel price comparison app Gaspy, which accepts and confirms live fuel price updates from around New Zealand, shows that on Monday 9 October, the cheapest 91 octane in the country was on sale for 175.7 cents per litre at a Gull Station in Auckland. The cheapest Z Energy station in New Zealand was also in Auckland; retailing for 180.9c per litre on Monday afternoon. The same day, Waiheke prices were 228.9c a litre.

Asked about the significant difference in even the standard price of fuel on Waiheke, Johan says the need to transport fuel by ferry to the island incurs an additional loading price.
“The price changes according to the company that delivers it to us, which in our case is Z Energy.” He says he is not party to the breakdown between the charge for the fuel alone and the charge for the barge which brings the fuel.

“There’s a ceiling (on price), because of the conveyer. Their cartage is on top of the price of the fuel and one of the things that they claim is that they have to have a dedicated trip for petrol. They’ve got to make up their part of it, and there’s a heavy loading on the basic prices of fuel.”

But while Waihekeans pay more at the pump for the added shipping costs of transport, stations on the island do have breathing space when it comes to determining their prices. “We could go lower,” Johan says. “We could probably move by a few cents here and there. But it’s about finding the balance of the volume and margin.”

Other stations on the island say economies of scale play a role, as prices in Auckland tend to get lower as individual stations become larger. They also blame exchange rates, global oil prices and tax levies. As far as the island price goes, managers point to the set-price they’re given for fuel and transport.

“They say they will not park any other vehicles alongside (the petrol tanker)” said Johan of the barge fee. “So not only are they taking up space with the tankers, but also cars next to it, so it’s virtually a dedicated trip for the fuel tanker.”

Dorothy said fuel prices aren’t a new problem. “It has been an issue in the past. One puts their prices up and they all put their prices up. The upshot is that they’ve lost our trade. We always went there for petrol and they’ve lost it. People are watching their income and how much they spend on petrol.” • Richard Jones