The fifth Waiheke Playwrights Festival opens on Friday 24 February. Growing in size and sophistication each year, this popular annual event will showcase the work of seven playwrights in a programme packed with variety.
All the plays are ten minutes long and written by Waihekeans. They are directed by seven local directors and will feature 23 local actors – all within a two-hour programme.
No one tells people what to write or set a theme, so the topics are, as ever, very varied. After Gallipoli explores a little-known aspect of WWI, while Robottom is set in a retirement village with a super efficient manager.
The Crossing is a conversation between two women on the ferry from Waiheke to Auckland. Like many of the plays this one deals with a serious subject but has a funny twist at the end. The first half is rounded off with Virtual Reality looking at father-daughter relations in the year 2041.
Following the interval, A Deathday Party imagines a world in which we can choose when we want to die, and He Teka E Noho Ana is a Maori production involving the spirit world. The evening finished with Rat Race, which poses an intriguing question: who are cleverer, rats or humans?
The festival is presented by Grow Your Own Productions (GYO), the brainchild of Colin Beardon, who chaired Artworks Theatre for four years before turning his energies to encouraging local writers.
“The festival exists for one purpose only,” he says, “to allow Waiheke people to tell the stories they want to audiences around the island.”
One of the intentions behind the Playwrights Festival is to take the plays into the community rather than making people come to a theatre to see the show.
“Over the years, the festival has performed in just about every hall on the island. Locals love to have the festival visit them and performances are often sold out. Almost every show last year ended up with standing room only,” says Ray Waru, artistic director. “People turn up from all over the place and just have a ball.”
Profits from the performances go to community projects. Two of the shows will be fundraisers for community groups with the remaining profit donated to Budgeting Services and Suicide Prevention.
“There are great stories again this year. Expect the usual mixture of energy, imagination, laughter and perhaps a few tears, and it’s all 100 per cent pure Waiheke,” says Ray Waru.
The fifth Waiheke Playwrights Festival 2017 will present two performances at Rocky Bay Hall on Friday 24 and Saturday 25 February. The following week the festival goes to Onetangi Hall on Friday 3 and Saturday 4 March. The final performance will be Sunday 5 March at Artworks. All the shows start at 7.30pm except for the matinee which is at 4pm.
Reservations are open – email gyo17@vodafone.co.nz or ring (09) 372 6211. • 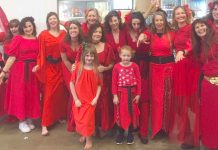 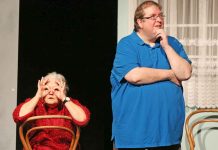