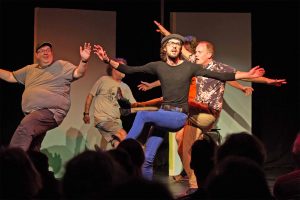 Considering the sell-out first show of Waiheke’s first soap opera Ostenders, it’s more than likely that a few other suburbs may get a workover from the deft improv group Quip!

Word is that a successful run of five episodes would trigger the chance to let the soap-suds bubble up in other areas: Home and A-Rocky Bay, Emmer(surf)dale or The Bold and the Palm Beach Beautiful, anyone?

Anyway, I digress … on the back of that first performance on 28 January, this idea has serious legs. By the time you read this, we’ll have already delved another 90 minutes into the Terry-Miranda-Pierre love triangle, probed even deeper into the tragic repercussions of the poo-nami of 1986, and wondered (slightly queasily) at what’s behind the culture at Yurt & Yoghurt. • James Belfield