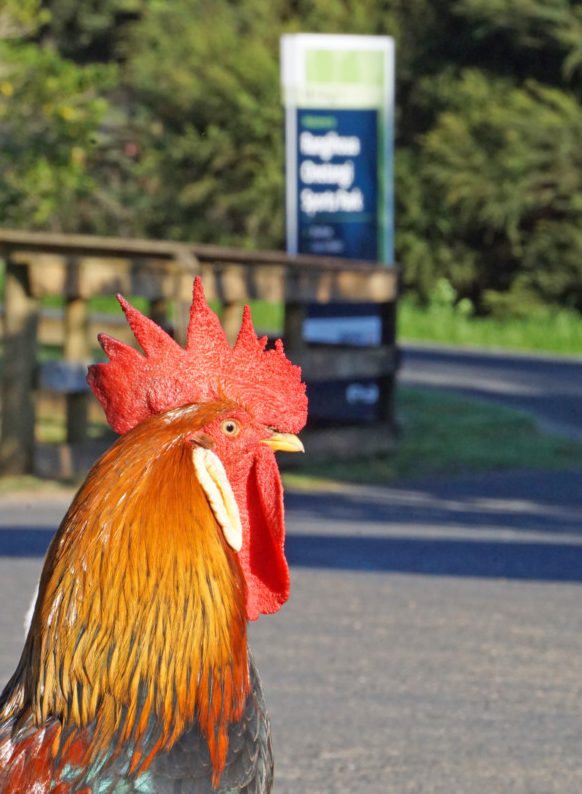 Volunteers have been shocked to discover that teenage boys have bashed about 50 roosters to death at Onetangi Sports Park.
Hayley Wilson, who runs the Friends of the Onetangi Roosters group, says it has been “exceptionally disturbing” seeing the intentionally broken bodies of roosters over the past three months.
Waiheke police have now referred a 16-year-old boy from Rocky Bay to the youth aid section over the killings, says Sergeant Chris Kerekere.
Hayley says the boys were using golf clubs, tree branches and garden stakes to bludgeon and stab the roosters and wild ducks at the reserve.
“We’ve been finding bodies everywhere and not in very nice states.
“A number of people who do feeding and volunteer to take stuff down have kids, some had toddlers with them.
“The bodies with all sorts of different damage done were just lying there for everybody to see,” she says.

One of the teenagers involved had talked to his peers about his gruesome activities and cameras and witnesses began to uncover who was responsible.
“It’s really disturbing because they are young kids and what happens when they run out of roosters?”
She had become “attached” to many of the older roosters, which were picked off first because they were more trusting of people.
“It’s heartbreaking. I go down there every second day and you get to know them – they have all got their own personalities.
“I took on the job with the roosters because I know they suffer enough already, without people attacking them.”
The only positive thing to come out of the attacks is that people have stopped dumping their roosters at Rangihoua Reserve since the killings began.
“It has brought attention to the roosters’ plight.
“People have realized it’s not okay to dump unwanted animals down there.”
About 50 roosters remain at the sports park, but have become more timid since the attacks began, she says. • Rose Davis