Home News From The Editor

Time to dust off road code

Jim Mahoney -
0
Drivers who believe a line of parked cars on their side of the road is an invitation to swerve out, despite oncoming traffic on a narrow road, should cease reading now. Ditto those who think a slow bike rider...

It’s time to mend the cracks

James Belfield -
0
The splinters and fissures running through Waiheke have never seemed so desperately close to causing a devastating crack in our delicately poised community. Sure, any family of nine or so thousand individuals is going to have its own pressures and...

The ties that bind us

Liz Waters -
0
With a few outstanding exceptions, we are direly short of leadership at this point in time, not least in local government. Leaders – great communicators, far-seeing, motivational, inspiring and persistent – literally create a compelling future that galvanises their enterprise...

James Belfield -
0
“Today, I spent a big part of my day talking to genomic and biotech companies as soon we will run out of reagents as airplanes are not flying to South Africa. It would be ‘evil’ if we can not...

Liz Waters -
0
This week, with the gentle November sun lancing down on a calm ocean around Waiheke, this may well be the most beautiful place on the most generous of planets. According to one smart young physicist in the news this...

How to study canaries in the Hauraki Gulf

James Belfield -
0
Hidden 133 pages into the quite magnificent 160-page State of our Seabirds 2021 report into our feathered neighbours of the Hauraki Gulf comes a frightening analogy. “Seabird species in the region are distri- buted in accessible colonies across the Gulf, feed...

Contagion comes in many forms

Gulf News -
0
Earlier in the pandemic, there was a useful reminder to build up a set of personal precautions as if everyone you met could have a life-threatening and highly contagious illness. And to treat every encounter as if you yourself...

Our life support system at stake

Gulf News -
0
“There are no prizes just for showing up,” international human rights lawyer Kavita Naidu, a Pacific delegate to the COP26 conference, said on the eve of the ritual gathering of world leaders in Glasgow this week. He was aiming squarely...

A wake-up call from the birds

James Belfield -
0
From the mad morning rush of squabbling tūī, the insistent barking of the neighbourhood ducks and the maudlin call of an elusive shining cuckoo that flits somewhere at the back of our valley, it’s clearly peak mating season for... 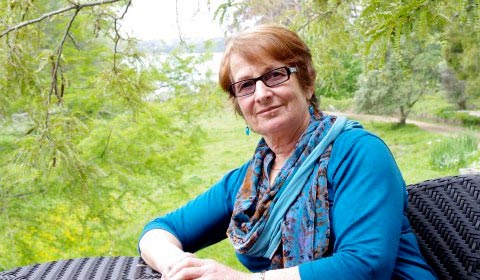 After a career which started in the newsrooms of the New Zealand Herald and Northern Advocate, Liz Waters and former husband David Waters built the 42-foot ketch Pendragon in Whangarei. They then spent four years sailing her round the world, crossing the Indian Ocean and rounding the Cape of Good Hope.

The trip involved four trans-Atlantic crossings, and shore time in such far flung places as St Helena and Bahia in Brazil as well as the West Indies, Bermuda and the Azores and, on the return voyage from Britain, the Panama Canal, the Galápagos Islands and French Polynesia.

They completed the circumnavigation in 1977, restored a derelict sailing scow and, after the birth of the first of their three daughters, bought shares in Waiheke’s newspaper.

Waiheke in the feisty 1980s was their next adventure.

Liz took over sole ownership in 1994 and since then Gulf News has continued its tradition of in-depth, professional reporting on local issues, picking up its fair share of awards along the way.

Liz sees a strong local newspaper that gives in-depth coverage of the issues that affect it’s community as a key factor in helping a region maintain its identity and the engagement of the whole community in its own decision making.

Staying true to the paper’s long heritage of being driven by journalistic endeavour rather than commercial imperative is something she holds dear.

“We have a job to do. That is what we owe people and that is what we offer advertisers – a newspaper that is a must read in the community because it canvases all those issues that are important to people who live here.”

As with any newspaper, she says, “ you’re only as good as last week’s issue”.

Liz’s love of sailing continues with the 32-foot classic Woollacott boat that she bought as a derelict hull and restored eight years ago.