Mudbrick Vineyard’s  B J Sebastian has been chosen as this year’s Ambassador Chef by Beef and Lamb NZ. It’s a title given to some of the best chefs in New Zealand.

B J, who grew up in India, always knew what he wanted to be. His family owned a seafood and cattle farm, and he remembers helping his grandmother forage for fresh ingredients and watching his mother cook.

When his grandmother and mother realised he was determined to cook professionally, his dad advised him to get a qualification before traveling. That way, if being a chef didn’t work out, he’d at least have a plan B. So he enrolled at Mahatma Gandhi University and graduated with a Bachelor of Commerce.

“It was smart advice, and they’re really happy about my achievements, and he’s (his dad) so proud.”

Soon after, he left India, first to the Maldives, then Singapore and on to Malaysia, before working in London at the Gordon Ramsay-owned restaurant Maze. After working and travelling in Sweden for a while, he heard what a great country New Zealand and was made his way here. He worked for a few luxury lodges, hatted restaurants was and wineries, then made his way to Mudbrick, where he now works as executive head chef. • Kerry Lee 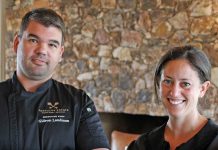