Home Arts Mix of formality and festivity at Piritahi tuwhera 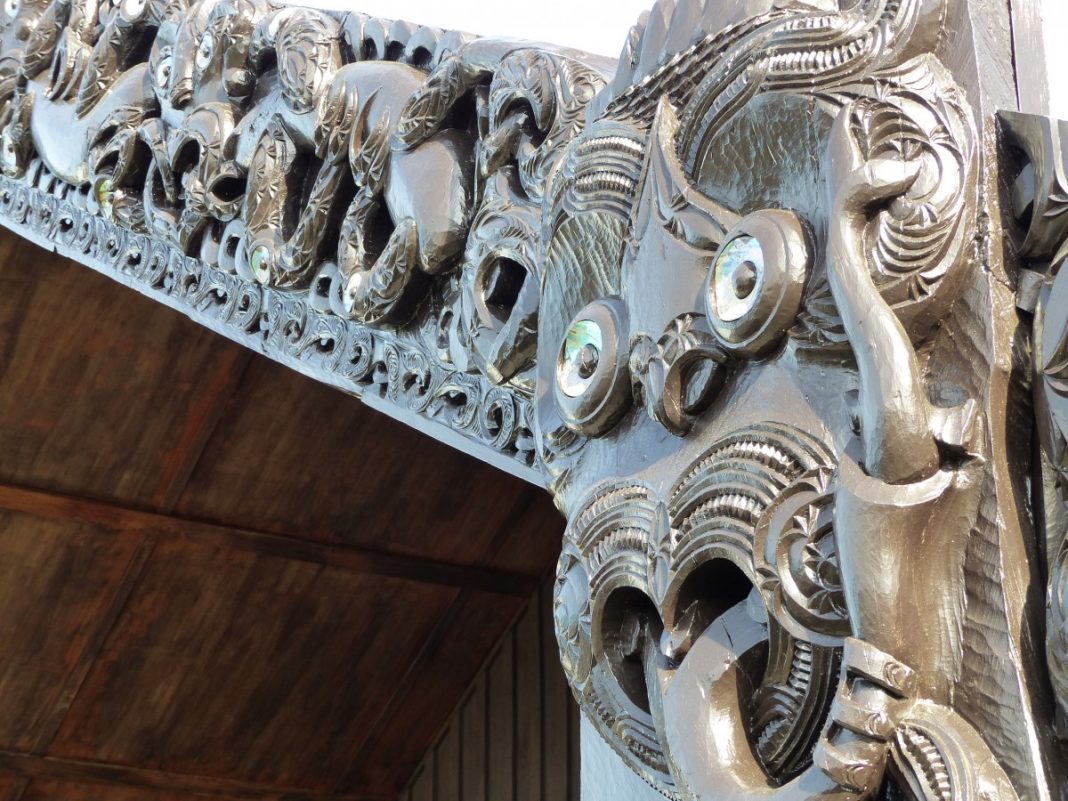 The long-awaited ceremony held on Sunday to officially open Piritaha Marae’s whare whakairo, house of carvings, was a mix of formality and festivity.
Representatives of iwi from around the region, members of parliament, Waiheke residents and visitors attended the day of celebrations, the culmination of 15 years of carving and weaving.
Guests waited outside the gate for the karanga which would welcome them onto the marae.
Sculptor Paora Toi Te Rangiuaia stepped out to brief people on procedure.
“It’s going to be a short thing,” he said of the powhiri. “Maybe a couple of hours.”
The marae opening was such a big event, the first voices guests would hear would be those of priests chanting to the carvings, he said.
“They are going to wake up the house. It has taken 15 years for this whare to be dressed but it has all been worth it.”
Huhana Davis sang the karanga and guests filed through the gate and along the flax and adze-hewn, but otherwise unadorned, pou that line the path leading into the marae’s meeting grounds.
Autumn sun warmed the marae. Pohutukawa at the perimeter flowered and a flag with the Piritahi logo depicting the four winds flew in a light breeze off Te Huruhi Bay’s waters.
Speakers addressed in te reo and in English the wharenui, and the carvings invested with the spirit of tipuna, ancestors.
“This is the marae of many waka,” said Bobby Newson, cultural companion to Auckland Mayor Len Brown.
“All the genealogies of the rangitahi and tamariki here, like myself, are a mix. In this house you will find that mix of marriages.”
Mr Toi Te Rangiuaia said: “If someone asks you from whence do these waters flow, you can point to a face that is familiar to you.”
Auckland Mayor Len Brown opened his speech with an address in te reo, then in English.
“It’s good to be here in the independent republic of Waiheke,” he said.
“It’s a beautiful day for a beautiful occasion.”
He had already been shown some of the carvings.
“They told me the story of Piritahi and all the hard mahi (work) over the decades.
“Piritahi is a constant thread through the past into the future. This is an urban marae where all the waka came to beach at Blackpool (Te Huruhi Bay) and into this marae.”
Waitemata and Gulf ward councillor Mike Lee described the occasion as auspicious.
“The culmination of a 40 year project that was initiated by people of foresight, the whare whakairo is a true work of art.
“Piritahi is a universal marae. Not only is it a multi-tribal marae but a marae for all people on Waiheke. It has enriched the culture on Waiheke.”
In an informal style of a wero, challenge, Ngati Whatua kaumatua Matt Maihi dropped envelopes that contained donations to the marae and the occasion. The gathering laughed as he turned and slapped his thigh, warrior-like, as he returned to his seat.
In the spirit of the moment, Ms Davis blessed the gift then came forward to collect the envelopes.
Waiata and haka performed by Waiheke school-children, and a hakari (celebratory meal) followed and visitors were invited to enter the whare whakairo. • Mark Peters