Efeso, who is favoured by 27 percent (a four-point lead) according to the latest Auckland Ratepayers Alliance-Curia poll, arrived at the Saturday market at 10am, and spent his time there talking to people one-on-one or in groups about what they thought were the biggest issues facing our community.

The councillor’s signature campaign policy is a five-point transport plan which includes a fare-free public transport system, expanding the network while adding more frequent services, tying Auckland Transport more closely to council policy by putting two councillors on its board, rolling out AT’s parking strategy in a fair and democratic manner and supporting electric ferries and integration of ferry services into the wider public transport network.

The ferry service in particular is a big issue for Waiheke, with a looming government review aimed at bringing Fullers’ Waiheke-to-Auckland service under the Public Transport Operational Model after a decade of campaigning from representatives and community groups. Critics say excluding the service from the PTOM has led to Waiheke residents paying the highest ferry fares in the region and missing out on benefits such as the government’s half-price public transport fares subsidy that virtually every other service gets. • Paul Mitchell

Full story in this week’s Gulf News … Out Now!!! 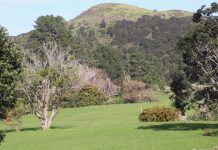