Called Waiheke Wāhine Maramataka – Waiheke ko te Kāinga e, the calendar presents 13 women, some long-term residents and others relatively new, and Jeanine is quick to say that it doesn’t stop here. She has more calendars planned to cover coming years.

“This is a three-year project,” Jeanine told Gulf News this week.

“I was inspired by the book NUKU [Stories of 100 Indigenous Women by Qiane Matata-Sipu],” says Jeanine. “That was really highlighting different mana wāhine and I thought for a geographic region, this island has so many and so I thought this was a good opportunity to capture them.”

Jeanine says she felt it was timely with the New Year being celebrated at Matariki and the recent resurgence of Ngāti Pāoa contribution to the island.

“What I wanted to do was celebrate people who make this place ahi kā. Some are mana whenua and some have chosen this place. It’s about who brings life to this island and who contributes to the island. They put their heart and soul into this island and they keep the balance in the community.” • Erin Johnson 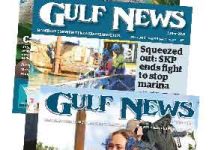