Waiheke will be the final resting place for Jim Anderton, one of New Zealand’s most influential politicians in a career that spanned three decades.

Mr Anderton, a former deputy prime minister and president of the Labour Party, will be remembered most for walking away from Labour over Rogernomics during the second term of the Lange Government in 1989, and forming New Labour.

In that time of tumultuous change, he would often come to Waiheke to visit his mother, Joyce, who lived in Blackpool in the late-1980s after an earlier period on the island in the 1960s, when Mr Anderton was in his twenties.

His wish to be laid to rest here indicates that the island remained a special place for him even though the former Aucklander lived in Christchurch after winning the Sydenham seat in 1984. Mr Anderton, 79, died last weekend after a period of ill health.

After forming New Labour, Mr Anderton became leader of the Alliance – a centre-left political grouping which, three years after the introduction of MMP, become a coalition partner in the Labour-led Government of Helen Clark. During the Alliance’s formative years, he met Sandra Lee while visiting Waiheke and she became the party’s deputy leader.

Mike Lee, her former husband and long-serving local politician, recalls that Waiheke, and particularly Rocky Bay, was something of a stronghold for the Alliance in the 1990s.
“He had a legion of supporters on the island,” Mr Lee says.

His mother Joyce Henry was well-known on the island as a fundraiser and organiser for the Oneroa Bowling Club and the Buffalo Lodge. She delivered meals on wheels until a few months before her death in 1990.

Mr Anderton recalled at her funeral: “She was the only one who could call me Jimmy and get away with it.”

For some years he continued to come to Waiheke, staying in the Blackpool house he had built for her. A further Waiheke connection was his former press secretary, Brian Healy, who retired to Onetangi but remained a close friend.

“The island was a centre of gravity for Jim Anderton for three reasons – his family connection through his mother, his personal connection with Brian Healy and with the Rocky Bay Alliance stronghold,” Mr Lee says. 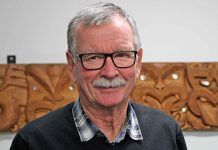