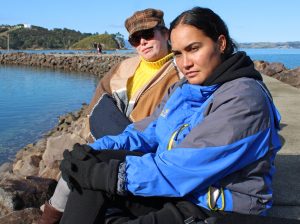 Lawyer and activist for Māori land rights, Pania Newton, sat on the breakwater at kennedy Point with a group of ten people from Ihumātao who came to support Protect Pūtiki last Friday.

“We’ve come to support, to stand in solidarity with the kaupapa, standing on some of the similarities that we’ve faced at Ihumātao,” Ms Newton told Gulf News.

“This is unjust and we should be supporting what is happening here,” she says.

“The reason why I am here is to protect the taonga here and to stop the desecration,” Ms Newton says, adding that it was okay to put kororā on the bank notes.

“I’m too disappointed to come here and not see more people behind this cause. Where is everybody?”

Ms Newton’s advice to those fighting the marina at the site is: “it’s not over until its over and the people will know when that is”.

“I can’t tell you how many times people said our issue was a fait accompli and we should give up. But not one house has been built.

“We mustn’t lose hope. The struggle at Ihumātao was a struggle of hope against hope. When one door closed we looked for a new door. We were always hopeful that there would be something good behind those doors.”• Erin Johnson