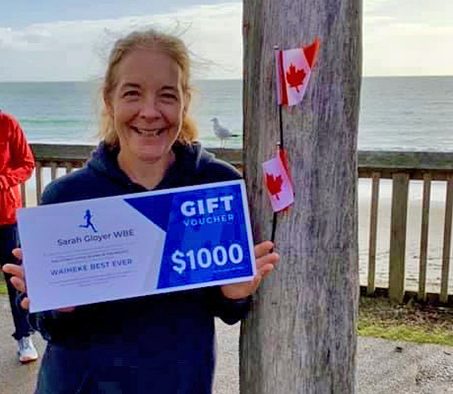 Inspirational runner, trainer, Gulf News columnist and Trail Tribe champion Sarah Gloyer has been awarded a Waiheke Best Ever certificate and $1000 for her efforts to keep the island fit and healthy.

The award comes as Waiheke Harriers held their final AGM, wrapping up the running club and using what was left in the coffers to donate $1000 to Waiheke High School Sports, $4100 to the Waiheke Walking Trust and the rest to Sarah for her contribution to running here.

“Sarah has been the biggest inspiration to runners and potential runners on the island over the past 15 years at least and pretty much all of it she does for nothing, just for the love of changing people’s lives really and she has certainly achieved that,” said Gary Wilton of Waiheke Harriers, which has been operating on the island for more than 30 years.

“There are people who would never have run in their forties, fifties, and sixties who are now addicted, just like the rest of us.

“But it’s not just about running, it’s about changing your life and feeling good about yourself and Sarah is good at teaching people how to motivate themselves.”

On receiving the award, Sarah said she was “blown away”. She told Gulf News she loves building up the island’s running community. • Liza Hamilton