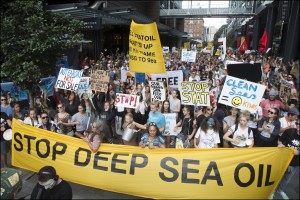 The march was part of a worldwide weekend of protests, calling for urgent action to be taken on reducing greenhouse gas emissions, before the United Nations Conference on Climate Change began in Paris on Monday.

About 8000 protestors joined the march in Wellington, and 3000 in Christchurch, while smaller protests took place around New Zealand.

Internationally, more than 600,000 people marched in 175 countries, calling on leaders to set goals in Paris to reduce reliance on fossil fuels that contribute to climate change, and to move to more sustainable forms of energy.

The Auckland march saw people of all ages and from many different cultures walking with placards and banners from Albert Park to Myers Park, chanting “one, two, three, four, fossil fuels are out the door” and “two, four, six, eight, action now it’s not too late”.

Groups such as Forest and Bird, Greenpeace, and Amnesty International took part in the march, as well as vegan protestors raising awareness of the significant role of animal farming in contributing to greenhouse gases.

At the end of the march, a moment of silence was held for victims of climate change, and a haka was performed, issuing a challenge to the government to lead the way on addressing climate change.