Island Gelato was the island’s first business officially identified as a place of interest last week after a staff member attended Sound Splash and later tested positive for Covid-19.

Co-owners Geoff Tippett and Ana Schwarz did their best to keep cool in light of the news and say they were lucky to be able to bring in staff from their new Ponsonby store to cover while Waiheke team members went into isolation.

Tippett says that with most businesses likely to experience something similar soon, it’s crucial for owners to create a contingency plan.

“All businesses will come up against this at some point and it’s a matter of doing what we can. It was a bit of a scramble for us but we managed to keep the train on the tracks. The most critical thing for many operators is the current staff shortages and I think it will be hard for many businesses.”

Two Island Gelato staff members are currently in isolation and are getting regular tests, says Tippett.

“Our staff member who tested positive was sick for around three days but has been feeling fine since.”

The store is listed on the Ministry of Health website twice, and anyone who visited on Monday 24 January between 7.20am and 1pm or on Wednesday 26 January between 10.30am and 11.30am should self-monitor for Covid-19 symptoms for 10 days and, if symptoms develop, get a test and stay at home until they get a negative result. 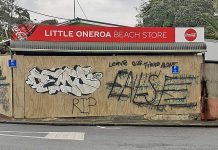 Graffiti an ‘appalling lack of judgment’