The High Court has dismissed a request from Ngāti Pāoa Trust Board for a judicial review of the decisions that led to the granting of resource consent to Kennedy Point Boatharbour Limited (KPBL) by Auckland Council.

In her decision delivered on Friday 29 April, Justice Anne Hinton says that at the heart of the judicial review proceedings are decisions by Auckland Council in late 2013 to recognise the newly formed Ngāti Pāoa Iwi Trust over the Ngāti Pāoa Trust Board as the mandated representative of Ngāti Pāoa for Resource Management Act (RMA) and Local Government Act (LGA) matters. Also of significance in the case was that Auckland Council confirmed its 2013 decisions in 2014 after the trust board had challenged it, drawing the council’s attention to a Māori Land Court order that the trust board was the appropriate representative of Ngāti Pāoa for purposes of the RMA and LGA. 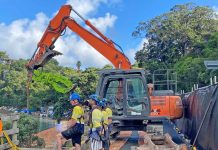