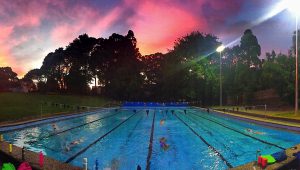 With both schools willing to consider the option, a heated, 25 metre, six-lane lap pool for the island could be built between Waiheke’s high school and the adjacent Te Huruhi Primary for only a little over $1 million and in a remarkably short time.

He says the opportunity for a facility for the island and its 1000 students will obviously be brief.

However, with both schools prepared to look at the opportunity, a pool at the potential new site should be vigorously explored, he told Gulf News this week.

“This is a very narrow opportunity and we have a chance to have something built and someone willing to fund it.

“I would be stunned to think the island would not go with opportunity in this case.”

Using what he describes as “broad brush strokes”, he says the 25 metre pool and its surrounds would require an area of 1275 square metres, and the timeframe for the build could be as short as 200 days.

He says the pool at Pakuranga College has been successfully operated for 21 years. Its six-lane lap pool is heated, covered at night and available for public use, including long-running community evening sessions. It is open year-round, with minimal ancillary buildings.

Mr Miehe, a director of the SwimGym business that leases the existing Pakuranga College pool for swimming lessons, says the lack of overhead cover is not an issue. To have it enclosed, and the filtration necessary to keep the indoor environment breathable, would be enormous, he said.

As it is, their young athletes enjoy competing in the pool in the outdoors environment.

On Waiheke, the primary school pool at Te Huruhi has been empty and closed for two summers and a replacement won’t be an entitlement when the Donald Bruce Road schools are redeveloped over the next two years.

An outdoor pool would be cheap and easy to run, with a relatively low capital cost, and at worst could be closed for a time during winter to lower overheads, he says.

SwimGym on Waiheke already has local instructors and a year-round programme and the numbers justify a heated outdoor pool as a starting point.

Mr Miehe points to Water Safety New Zealand’s Water Skills for Life programme and says that in situ learning is recognised as the foundation for all the skills needed to live safely, especially on the island. “Kids need to be safe – it’s crippling if they cannot keep themselves safe around water.”

In the past, freezing outdoor school pools had provided skills and perhaps even a higher standard of awareness of what it would be like to be at risk in the sea.

“A stand-alone community pool, as such, is most unlikely to be a priority for the [council] in any foreseeable future,” he says.

“Waiheke is an island and the number of children that live here – relative to the 38,000 population in areas like Pakuranga – is pretty small.”

By comparison, and for immediate discussion, the school site would be a relatively easy option that would not preclude community use for other age groups.

“It is appalling in my view if strife in terms of what sort of facility is developed were to stop our accomplishing it,” he says.

“Working together for a common goal makes much more sense.

“Nothing is completely off the table and it’s clear that the funds are pretty much there to put something in place.

“We should take a pragmatic look at all the potential options to see which is the most likely to be achievable.

“You can start with an outdoor facility and then look at whether or not you need cover.”