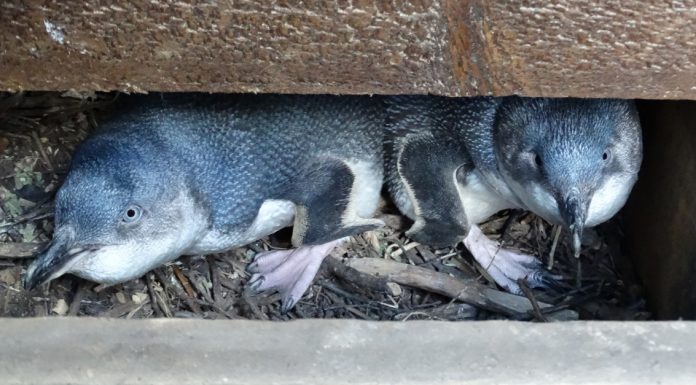 The eggs are hatching, the first chick punches its way through the eggshell to breathe air. Finally, the adult stands up, a clear angle shows the new-born’s beak nibbling at one end of the egg and wriggling its wet, bony head to peer out into a new world. It looks around anxiously as eggshell pieces break away to form an umbrella mosaic close by.

The sound of footsteps is heard on the rocks nearby. The adult bird begins to quiver and gasp. It shrieks and pierces: a wild sound that rips through the night. The chick is all wet down and still struggling through the shattered eggshell.

The shrill cry is one of delight. The other partner has arrived to see their new-born emerge into the world. Now together the proud parents excitedly shrill as their penguin chick relaxes into their pecks and wings.

I read about these little blue penguin in National Geographic, where these beautiful creatures were described as “half bird, half fish” and “like no other creature on Earth”. David Thompson captured this incredible moment, as he witnessed the birth of a yellow eyed penguin at Enderby Island.

Penguins are an endemic species of Aotearoa and have adapted over 60 million years. Renee Scheltema, documentary filmmaker of Normal is Over, once told me she thought we shared 50 percent DNA with penguins.

The smallest species of penguin in the world is the kororā/little penguin. These little blue penguins happen to make a home around the harbours and bays, on the beaches and beneath the houses and boardwalks of Waiheke Island.

•Robin Kermode from Stories in Action