Anti-vaccination graffiti on Waiheke which referenced the death of a teenager has been called out by Waiheke Local Board Chair Cath Handley.

Graffiti on hoardings at Little Oneroa referenced the death of an Auckland teenager, linking it to the Covid-19 vaccine.

“It was a person’s name and it was a girl who died who was known to people. I know at least two households here that knew her,” said Ms Handley.

“I gather that she may have died shortly after the vaccination, but her death was unrelated to the vaccination and it was for a medical condition unknown, as I understand.

“I think someone claiming they know the medical answer when the medical specialist doesn’t know has an appalling lack of judgment and empathy for those associated with that young woman.”

Prime Minister Jacinda Ardern has already gone on record as saying she has been advised there is no link between the year 13’s death and the Pfizer vaccine. Meanwhile Chief Coroner Judge Deborah Marshall has also issued a statement, alluding to the ongoing speculation about the cause of death of the teenager, which has been referred to the Coroners Court. She stated that based on the information available to date, it does not appear that the death is linked to the Pfizer vaccine.

Anti-vaccination graffiti has also appeared on hoardings beside Ostend’s Countdown Supermarket, and Ms Handley says the local board is taking an active role in response.

“I did contact the police because they are the only ones out and about generally in level 4 and they were going to be getting hold of the supermarket to see if they could cover up that graffiti,” she said. “It has also been reported by Robin Tucker our board member, to council’s Report a Problem, so that it was logged with council. 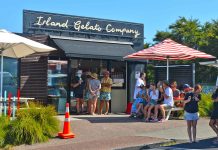