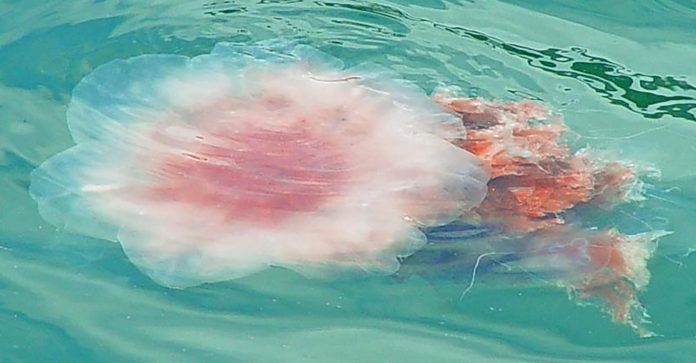 A sizeable jellyfish discovered at Owhanake Bay this month left many onlookers curious about the brightly-coloured creature of the deep. Several photos snapped by residents and shared to Facebook and other sites captured the massive pink blob, known as the lion’s mane jellyfish, in all its glory.

One onlooker, Bianca Ranson, was taking her dog for a walk when she stumbled across the jellyfish, which harbours a powerful sting.

“I was on a morning walk with my dog Puriri. We were playing in the water, and then I turned around and saw it lying there on the beach. It was pretty massive,” she told Gulf News.

“Tohu like these are so interesting, and when we record details about these kinds of findings – like during which moon phase, season and where they’re located – this can teach us a lot about our environment.”

The National Institute of Water and Atmospheric Research (Niwa) shared photos of the impressive jellyfish on its niwa_science Instagram account soon after the discovery at Owhanake.

“It is the largest jellyfish species found in New Zealand and can grow to a whopping two metres in diameter,” read the post.

“Lion’s mane jellyfish are found around the entire coast of New Zealand and as far south as the Campbell Island group in the Subantarctic. They occasionally swarm in large numbers in summer months to bays and harbours when there is an abundance of plankton to feed on.

“If you do encounter a lion’s mane jellyfish, say hello, but keep your distance! Even after being stranded ashore, their tentacles can deliver a nasty sting.”

Aside from the spectacular hue of the jellyfish found on Owhanake, lion’s mane jellyfish can also be coloured white and deep blue, with tentacles that can grow up to five metres long. • Sophie Boladeras