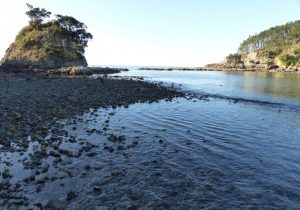 A recreational fishing park in the Hauraki Gulf would not provide adequate protection for marine life, the Hauraki Gulf Forum states.
In its submission on the government’s plan to create a fishing park in the gulf as part of a new Marine Protected Areas Act, the forum notes that a pattern of “incremental decline” in the state of the gulf is set to continue unless “bold” steps are taken to “halt progressive environmental degradation”.

The forum suggests that a fishing zone should be introduced at the same time as other marine protected areas in the gulf.
A more “systematic approach” to identifying marine reserves is called for in the submission.
The forum notes that Waiheke and Great Barrier local boards are interested in creating more marine reserves.
The owners of the Noises Islands have also called for greater marine protection around the islands, because they have seen “localised depletion and growing pressures, with 60 to 80 recreational boats congregating on the area on fine days”.
Marine reserves at Leigh and Tawharanui need to be extended because snapper and crayfish numbers are beginning to fall due to heavy fishing at the reserve boundaries.
The forum also suggests a species specific sanctuary could be needed to protect nationally critical Bryde’s whales and nationally endangered bottlenose dolphins that live in the gulf.
A seabed reserve could also protect the gulf from the harmful effects on the benthic environment of bottom trawling and scallop dredging, the forum states.
About 12,450 trawl shots were recorded in the gulf between 2011 and 2014 and increased scallop harvesting has been allowed in recent years.
“Dredging is known to reduce habitat heterogeneity and biological diversity, and it will be used in areas known to contain sensitive marine habitats,” the forum says.
The government’s plan for a fishing park in the gulf remains “silent” on the purposes of the Hauraki Gulf Marine Park Act or the role of the forum or Sea Change in managing the gulf.
The forum initiated Sea Change, which has been developing a marine spatial plan for the gulf.
“The proposed recreational fishing park has the potential to cut across the trust and goodwill of participants and undermine the package of recommendations anticipated from the Sea Change Tai Timu Tai Pari process,” the submission states.
In 2011 in the gulf, commercial fishing was worth $41 million, aquaculture earned $99 million, while the value of recreational fishing was estimated at $81 million, recreational marine activity at $550 million and tourism at $937 million. • Rose Davis