It’s hard to imagine a more successful vessel for her purpose than Fullers’ Quickcat. Purpose-built, turning 30 and probably nearing the end of her life, she’s taken the ferry company from five return trips a day in 1987 to 30 and been an integral part of our daily lives for generations.

She is probably the hardest working vessel in Australasia, according to company CEO Douglas Hudson who was part of the original decision to commission the vessel from her Australian builders in the mid 1980s. 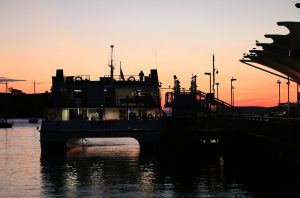 She’s had sisterships in Tahiti – running out to Moorea – and San Francisco and there are 100 of the successful design around the world. Workhorses all.

In contrast to previous ferry fleet owner Leo Dromboole’s motley fleet of harbour ferries perpetually battered in Auckland’s sluicing tides, her handling is as placid and well-mannered as her presence on the harbour, according to a former skipper at this week’s company celebrations for the ship’s 30th anniversary.

Dark nights and the Motuihe channel at its worst never worried either her island passengers or the skippers who took waves heaving down from the Pacific with as much composure as they did Round-the-World yacht race fleets and Sunday afternoon scrimmages in the crowded inner harbour.

Successive crews rapidly became familiar presences in the daily life of islanders and the ship herself is already missed. Her generous spaces – beloved of young mothers and commuters in unsociable moments – are morphing into a more bus-like ambience of wet umbrellas, careful sensibilities and tangled feet.

Snaking queues, whether in rain or blazing sun, have struck fear into the heart of established island business owners depending on the taken-for-granted arrival of their customers in good order.

Given the experiences of last summer’s rival fleet and Fullers’ own transition this summer to smaller craft that are far more affected by heavy weather, it looks doubtful that either the winter commuter sailings or summer overloads can be accomplished by smaller vessels, however well appointed so we are glad to know the old girl has some life left in her yet (Story page one and David Waters’ feature on the doyen of Fullers’ fleet page 16).

At Tuesday evening’s celebration cruise from Matiatia, long-time Fullers owner George Hudson honoured his early skippers and crews including first masters Peter Brough and Matthew Londrigan, the company’s longest serving master Lester Sowerby, whose father owned the Iris Moana’s sistership Ngaroma that joined the fleet before the decision to build Quickcat, and the fleet’s first and only female skipper Louise Deehan-Owen.
It felt – in the way of business in its day – very much a family affair.– Liz Waters

Great headlines – but would you take a punt on him?