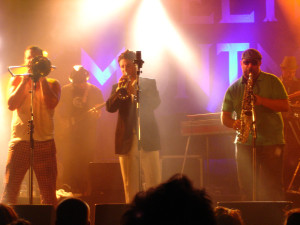 Top Wellington band Fat Freddy’s Drop is coming to Waiheke for the first time ever.

Pre-sale tickets go on sale from 11 August for the concert which will be at Cable Bay Vineyard for one show only on Sunday 31 January 2016.

The New Zealand seven-piece have had their musical style described as any combination of dub, reggae, soul, jazz, rhythm and blues, and techno.

Having sold out Auckland Town Hall for their 24 October concert three months in advance, the strictly limited 2000 tickets for Cable Bay are expected to be in hot demand.

Fat Freddy trombonist, Joe Lindsay, says the band is “super excited” about coming to Waiheke for the first time.

“The band has been in studio lock down this winter working on a new album and we’re keen to get back to playing live and shaking that shiverman loose. Let’s see what you’ve got Waiheke.”

The band’s fourth studio album will have been released by the time they play on the island next year.

Meanwhile, their 2015 tour schedule is a mammoth 22-citywide continental trip across Europe in November and December before returning to New Zealand sunshine.