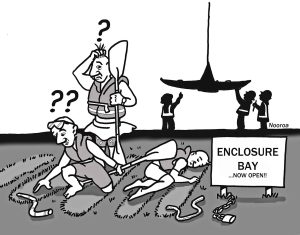 When Waiheke Sea Scouts chairman Daniel Tisch read a public notice in Gulf News on 31 March, warning that kayaks in Enclosure Bay would be removed by 25 April at 5pm, he asked the Waiheke Local Board what would happen after the deadline. Tisch says he was told that they didn’t know.

Local Board chairwoman Cath Handley says that removing the kayaks is Auckland Council’s responsibility and, although the board is consulted, the council looks after Waiheke’s beaches and reserves.

Annabelle White, the council’s communications contact for Waiheke Local Board, said no decision had been made on where the kayaks would be stored three days before deadline.

“The council hopes that everyone will collect their private property from Enclosure Bay by the deadline, and therefore none of these points will be an issue. Next steps and a storage site will be decided if this is not the case. At the moment the main focus would be letting owners know that they need to collect their belongings by the set deadline,” White said.

While it might seem surprising that the council hadn’t found an area to store the kayaks, Handley said it was a logistics issue and that an assessment of how many kayaks were collected after the deadline would need to be made to see how big the storage area(s) would need to be. • Kerry Lee