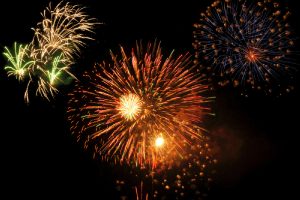 The skies are set to light up next month with Waiheke Dirt Track’s annual fireworks display, which will take place this year on Saturday 4 November.

“It’s some high quality stuff,” says Dirt Track member Rob Marshall, who is organising the event. “We want to put on a quality show for the community. We’ve done different themes throughout the years but I won’t divulge what it’s about this year. It’s always a secret.”

Guests will see a performance of fireworks set off by a professional pyrotechnics team from Auckland city accompanied by a music show, along with food and drink stalls. There will also be a selection of the club’s V8 and Super-A cars around the ground for petrol-headed visitors to get up close and personal with.

“There’s music playing throughout the afternoon keeping people entertained,” Rob says. “When it gets darker, we can fire up the screen and do different bits and pieces.”

Fully funded by donations from Waihekeans, the show comes hot on the heels of the start of the Dirt Track’s season, with races due to kick off on Sunday 29 October.

“We have it so people don’t have to go out and buy 80 or 100 dollars worth of fireworks and just have it all contained in one place at one time, and just have a great show.”

“We rely heavily on the community to donate, so we’ve got boxes at the petrol stations and around Oneroa. Any businesses or individuals who want to come on board can contact me.”
Gates will open around 5pm at the Waiheke Dirt Track on O’Brien Road. • Richard Jones