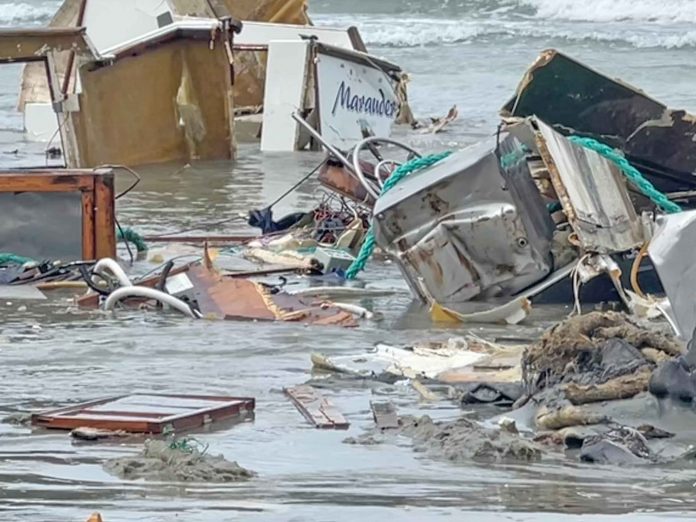 The final remnants of the Marauder, the vessel that sunk in Oneroa Bay, were broken up and pulled from the ocean last Thursday, 3 February.

The team at Gulf Island Earthmovers were deployed to clear the hull of the boat from the bay, but initial efforts to drag the sand and water-laden wreckage from the ocean with a rope attached to the digger weren’t successful.

A crowd later gathered on the beach to watch as the digger was driven into a metre of water before driver Dave Whiting’s expert of use the digger’s bucket to move and break up the boat’s remains.

“It was amazing – once we had broken up the remains, everyone walking up and down the beach stopped and helped to clean up the debris. It came up great, and we returned the next day to make sure the beach was spotless.”

According to Auckland Harbourmaster, the owners of the Marauder were on board when it started sinking on the afternoon of Sunday, 30 January.

The vessel began taking on water north of Waiheke, and the owners were able to move their boat closer to shore in Oneroa Bay before being rescued by a Coastguard vessel, according to the harbourmaster.

The owner dropped anchor to stop the vessel drifting, and the issue was reported to the harbourmaster at around 6.30pm.

“Harbourmaster attendance was not deemed necessary at the time, as the vessel was anchored in the bay,” a spokesperson told Gulf News. • Sophie Boladeras