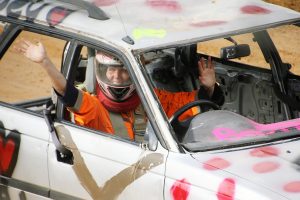 We started the day with two rounds of racing. Then we had our police, fireman and ambulance race with two police officers, James Bugg and Mike Kininmonth; three fire fighters, Danny Priest, Eru Watana and Cam Adams; and one ambulance driver, John Ball.

Result: first John Ball; second Eru Watana; third James Bugg. Thanks to all these services for racing and all their efforts after the storm.

After completing the next three rounds Russia Hati took out the most points in Modifieds, Bruce Beaumont (Slick) took the points for Super A and was also Driver of the Day.

The Demolition Derby was the last race of the day with 27 demo cars and six women racing. It was one of the longest and most exciting Demos we’ve had.

First place went to Esma McHenry, racing a car for Wadey who passed away recently with his daughters Caprice and Larrissa watching – a very emotional day for them – and Esma winning $350. Second was Matt, winning $250, and third Cam Adams winning $150.

Ben Whiting received $50 for the best hitter while $100 went to Pearl from the New Hope shop.

A huge thanks to Peter Harris, Scott Thomson, Donna Roth and all the helpers who made this an awesome day.

We are racing again on Saturday 20 January with another twilight meeting starting at 1.30pm.

Raffles start again on Thursday 18 January. All the best for 2018 from Waiheke Dirt Track Club. •