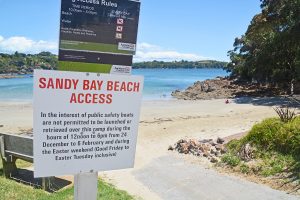 Waiheke doesn’t have enough boat ramps and those that are available to boaties aren’t up to scratch, the local board has heard.

The limited supply of usable boat ramps was raised at the December local board meeting with members agreeing that something needs to be done.

“The lack of launching facilities on the island startlingly obvious,” Paul Gillard told the board. “Our boat ramps are difficult to use, particularly at Matiatia where it’s often busy with traffic and unsafe. Oneroa is a very flat beach, where you have to virtually park your car into the axle which isn’t great. Just two weeks ago I saw a four-wheel drive with a trailer attached stuck there.”

Local board deputy chairperson Bob Upchurch agreed, saying he’s amazed that although Waiheke is surrounded by water with a large population of boaties, they aren’t catered to.

“I think this is why the island has such a great number of Sealegs amphibious vessels. It’s just easier not to have to rely on ramps here.” • Sophie Boladeras